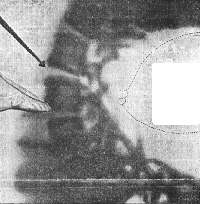 Another mystery of the human body - the spine - has just been pierced by science throught the medium of the X-ray. It has resulted in many new revelations that may contribute to the valuable study of tuberculosis, fracture and curvature of the spine.

While these things belong more to the realm of medical knowledge, the experiment, recently conducted in the Graduate Hospital of the University of Pennsylvania, in Philadelphia, brought forth many unusual facts hitherto unknown to or little understood by the average layman.

For instance, it upset a popular belief - never subscribed to by science - that there is such a thing as "double-jointedness". But more important, it presented a striking object lesson in the effects of careful training upon the correct development of all parts of the body.

The subject of this most unusual experiment was, appropriately enough, a famous New York acrobatic dancer, petite Miss Florence Elta Barlow, still in her teens. In submitting to the X-ray examination she probably contributed even more to medical knowledge than she has to the enjoyment of theatre and nightclub patrons.

It was the extraordinary flexibility of Miss Barlow's body, as revealed in her acrobatic dancing acts, that attracted the attention of science. It was discovered that she could do things that would be fatal to most human beings and yet she remained a normal, healthy girl. Science asked:

Her history alone helped much to provide the answer. Years ago Miss Barlow's father perfected himself in acrobatic dancing and then conceived the idea that this could be a thing of beauty and grace, a form of dance as rhythmic as the waltz. So he began to train his little daughter when she was only four years old.

Patiently father and daughter worked until Florence had perfected her body to a point where she can now literally "sit upon her own head". While thousands applauded her, medical men pondered the causes of her achievements. They were particularly struck by the fact that nightly she could assume the position of bending backwards, almost in "two". At this time many of the vital organs were greatly displaced, but this seemed to do her no harm, proving that the human body is susceptible to much training in unusual positions.

Miss Barlow consented to go to a hospital and be X-rayed in order that scientists might learn why her spine had been trained to do these things which other spines cannot do.

This hyper-extension of the spine is, in other words, a great flexibility. It was achieved by the dancer, first of all, by training almost from infancy or before the development of ossification of the bones. Ossificationis the process of the bones growing harder as the individual becomes older.

We often see very young children who can "bend the crab" very well while playing n school yards. The children can do this so well because ossification has not developed far. As they grow older it is more difficult and they don't try it. This is why we never, or rarely, see children of ten or more doing this "for fun".

Yet they could do it almost until old age IF they trained intensively, never letting up. If Miss Barlow, for instance, stopped doing her work for one year, she could never do it again, since the spine and muscles would immediately tend to return to average development. To do her work, she must practice constantly.

Aside from training, heredity admittedly had something to do with Miss Barlow's achievements. Doctors discovered a hereditary mobility in the joints that permitted them to slip over each other with more ease than in ordinary persons. This, however, is NOT "double-jointedness", a popular phrase that has no place in medical parlance. What people call double-jointedness is merely a flexibility of the joints, trained and inherited.

The ability of some people to bend their fingers backwards, especially little boys, falls into this category. In a small measure anyone could be trained to do these things - if, as we have seen before, the training began in very early youth.

When Miss Barlow bends her spine, it does not mean the vertebrae are separated. They are held together with ligaments and muscles. The X-ray photos did not show this because it is the trick of the X-ray to penetrate through muscles and show the bones.

But it is the ability of Miss Barlow to bend her spine until the vertebrae are far apart that reveals the extreme mobility of the joints. The average person's vertebrae seldom open more than a fraction of a fraction of an inch when he or she bends backward. That is because the average muscle of the back is not, like Miss Barlow's, tremendously developed.

Most, if not all, deaths resulting from falls are due to the spine being bent backward beyond its point of flexibility and then being broken. "The back is broken" is the common phrase. With the normal person having a spine likened to a piece of wood it does break, but with Miss Barlow, the spine bends like the corset steel.

In other words, if she fill andhad the presence of mind to relax her back she would merely roll over and over, while the average person would remain rigid and have his or her back broken. Of course, that does not mean Miss Barlow could fall from great heights and live, but the point is that it would be extremely more difficult to hurt her than ordinary persons.

Since most deaths due to accidens in falls and automobile collisions are the result of broken backs, the X-ray study of Miss Barlow is of great value to surgeons, for it will cast light on the study of the spine in hyper-extension. (Obviously, physicians couldn't break human backs by bending them backward just for the purpose of studying them.)

In the same way, the X-rays will contribute much to the study of curvature of the spine, its causes and prevention. For one thing, Miss Barlow has demonstrated that it is just as easy to train the spine correctly as it is to train it incorrectly. The latter "training" is by no means scarce.

Curvature of the spine is a deformity which comes on during the developing period of life, before the "bodies" of the vertebrae are solidly formed. In young people who are growing rapidly and whose muscular systems are weak, the bad habit of standing and throwing the weight of the body constantly on one leg gives rise to a serious tilting of the trunk; or ir, when writing at a desk, they sit habitually in a twisted position, a lateral curvature of the spine is apt to form. By constant indulgence in these bad habits the spinal column gets permanently set in a faulty position.

The extraordinary results of these experiments should not obscure the fact that Florence Barlow is different from other girls ONLY because she has trained her spine to perfection. Her childhood was exactly like that of other girls, except for this special training, and today she is a healthy, happy miss - perhaps a little happier in the knowledge that she has contributed so much to science.

Return to the Contortion Literature Page