The Split and What's Next? 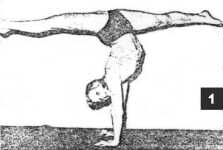 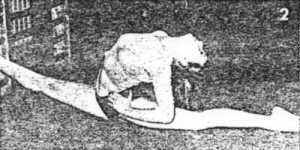 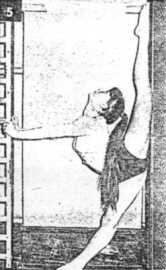 The split, an exercise especially popular among girls, was discussed several times in this magazine. So far, however, we have discussed the methodology of learning the split itself. Presently, for those girls who have already mastered the split, and can perform it without difficulties, we will give some hints as to how to achieve an extraordinary limberness in the legs, which will allow one to perform, for example, the split in a hand-stand (Photo 1).

In order to perform this exercise precisely as is shown on the photo, it is not enough to have mastered the basic split (which is easy to prove to one's self). In order that the legs of the trainee be in a straight line, she must be able to perform the super-split. The most simple way to achieve the super-split is to exercise splits with the fore-leg placed at some kind of elevation. This elevation can be a step of a ladder, a cushion from a sofa, a piece or wood, etc. Gradually, with the achievement of higher distance of the front foot from the floor, the pupil has to increase the time span of holding this position, adding back bending, which will also have excellent influence in mastering balance (Photo 2).

Good results can be achieved by stretching the legs in a standing position, facing a ladder, a door frame, or similar object, with the foot of the raised leg raised as high as possible (Photo 4). Consequently, backing the supporting leg further and further back, the pupil has to pull herself stronger and stronger towards the frame. With the vice-versa variant (Photo 5) even better results can be achieved. However this requires a structure for the pupil to push herself away from to be in front of her. If such a structure is not available, one has to use the help of a co-ed, who then stands in front of the pupil at a distance of approximately 1 meter. Additionally, during this exercise, it is possible to increase flexibility simultaneously while bending back gradually.

The exercise shown in Photo 6 requires an additional device, which consists of a strong belt with metal hooks. The belt must be placed in such a way that it does not interfere with the movements of the trainee, and assures safety leaning back with all the weight of the body.

One has to proceed with practicing the super-split only after the basic split is mastered perfectly and each time only after thorough leg preparation.

All exercises connected with the split must be trained equally on both legs.

One must not expect immediate results. Every kind of forced exercise leads to delay and resignation. It is better to patiently divide the exercises over a longer time period, rather than acquire unnecessary injuries through over enthusiasm.

Return to the Contortion Training Page